Today Abby, Logan, and I went to a Christmas party at the center where Abby gets some of her therapies.  It included a visit from Santa, singing, and a puppet show.  They both loved the show.  The puppets danced to Christmas music.  It was so cute!  Of course, they also liked getting a gift from Santa. 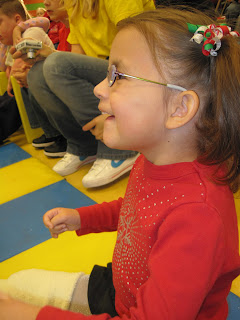 After the show, however, I had a bit of a problem.  First, let me just say that it was cold out...very cold...and the ground was covered in ice.  Now, I was offered a hand getting the kids out to the car, but of course I didn't need any help.  Why would I?  I can easily push Abby in her chair and hold Logan's hand while we walk to the car, right?  No.  When we got to the parking lot, Logan refused to walk on the ice (which was pretty smart-he has seen all of us fall on the ice at one point this week).  He would not take one step.  He stood still, saying "mom, hold me".  Great.  So, I hold Logan and the gifts and push Abby to the car.  I start the car first to warm it up, then put the kids in.  I use the keychain (already in the ignition) to pop the trunk so that I can load up all out stuff and then promptly shut the door (wouldn't want to let any of the snow in).  Apparently, when I pushed the trunk button, I also pushed the lock button.  You see where this is going.  After loading up the trunk, I try to open my door only to realize that I locked myself out of the car, with the kids in it and the engine running.  Great.

Well, we have AAA, so I wasn't going to get too upset.  They would be there shortly after I called....except that my purse with my phone was in the car.  Great.  So, I borrowed someone's phone to call Wes.  He called Triple A and Pop-a-Lock.  I knew I had seen commercials that said if there were kids in the car they would be there immediately......I thought.  Their advice was to call the police because it would be over and hour before they could respond.  So he did.  The husband of the director of the center waited with me in the snow.  This was all very embarrassing.  While Logan was not happy, Abby was laughing so hard we could hear her on the outside of the car.  Real funny, Abby.  So, the police call his cell phone to verify where we are, only they inform me that they don't unlock cars anymore.  They will have to notify the fire department.  So, yeah, a fire truck pulls up in the parking lot....but there was a problem with that, too.  The fire trucks do not unlock doors anymore either.  They could only bust out the window.  Great.  So we just stood there and looked at the kids and the car and the door.  They were curious about why Abby couldn't just unlock the door herself.  I told them a little bit about her and Rett.  We must have seemed pitiful, because despite that fact that they "can't " unlock doors, they used a piece of metal wedged in the door hinge to pop it open.  Yay!  Crisis averted....finally.

After it happened, my thought was that I had to tell Wes not to tell anyone about it.  I was so humiliated. Ugh.  But, after a couple hours, it became more funny than embarrassing.  Now, its just funny.
Posted by Ann Marie at 12:14 PM