We have already been trick-or-treating twice, and we will go again before Halloween. There are so many Halloween parties.  Abby is loving it.  She likes the lights, music, and all the costumes.  She liked it much more than the pumpkin patch.  We've had a busy few weeks-here's a few photos. 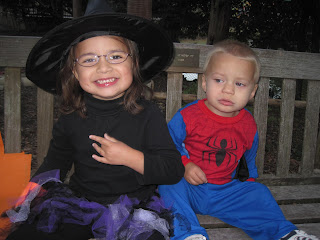 Abby and Logan loved trick-or-treating at the zoo.  Abby wore a witch hat with her cute tutu and Logan wore his spiderman pajamas costume. 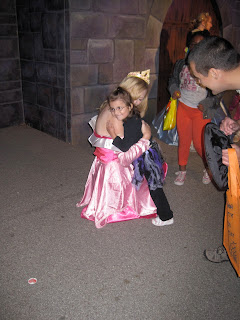 Yes, that is a hug!  Abby LOVED the princesses at the zoo, so we got her an Aurora costume for Halloween. 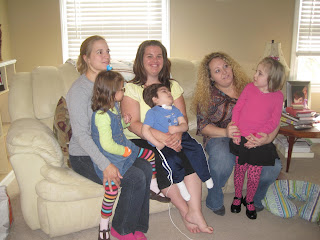 Abby and I had a play date with Aidan, his brother Kade, and Karlie and her sister Emily last week.  Aidan and Karlie have Rett Syndrome also. Aidan's mom, Kerrie, was nice enough to have us all out to her house.  Her boys are just precious!  I am so happy that Kim and her girls made it, too.  Karlie is absolutely adorable!  It is always great meeting with other Rett families.  We decided that a girls night out is in order very soon.
Abby's class had their Halloween party today.  She got to wear her costume, which she loved.  Unfortunately, she had a seizure at school this morning.  It was the first one she has had in nearly 8 months. Ugh.  She seemed fine after the seizure, just a little weak.  She still was able to stay for the party and even go to therapy.  Hopefully, it was just a breakthough seizure, and she won't have any more....hopefully.  In the rush to get to her school after hearing she had a seizure, I left my camera at home. She looked pretty sweet in her princess costume-you'll just have to take my word for it.
Posted by Ann Marie at 1:00 PM 2 comments:

It seems necessary this time of year to take the kids to a farm and pick pumpkins.  It seems like they should love the hayride, the pony rides, the petting zoo, and all the fall festivities.  Somehow, it has yet to turn out that way.  Logan was less than impressed with anything the farm had to offer.  In a patch full of pumpkins, he found a.... bouncy ball.  Abby was a little irritated that she could barely take a step without tripping on a pumpkin vine and didn't love the sun in her face all afternoon.  They weren't upset or fussy, but they definitely would have had more fun at home or the park.  With that being said, one would think we will buy our pumpkins at the supermarket next year, but I doubt that will be the case.  Maybe next year they will have fun, maybe.

Even though the kids didn't love the farm, we did get a few photos.  The smiles didn't come easy.  I looked ridiculous dancing around and singing behind the camera, but I'll do what it takes to get a cute photo.  After all, we had them looking all cute in their fall sweaters, drove across town, and carried them all over a farm-I was going to have something to show for it. 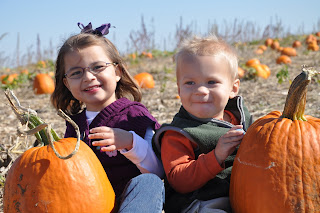 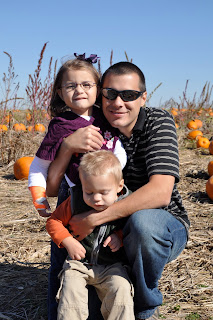 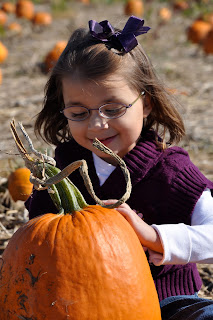 In honor of Rett Syndrome Awareness Month, I put together a montage of Abby. Well, I guess it just gave me an excuse. I have seen a few other ones lately and it gave me the itch to make one for Abby.   Anyway, here it is. Warning-It might be a little sad, or maybe its just me...but I can't watch it without crying. I didn't intend for it to be sad, but photos of little Abby are tough to look at, even though big Abby laughs when she watches it.  I think it will be useful to have a short DVD that gives information about Abby's journey with RTT.  I can give it to businesses/groups when it comes time for fundraising or getting grants etc.

Photo and video editing at www.OneTrueMedia.com
Posted by Ann Marie at 11:53 AM 4 comments:

Miss Abby has fractured her arm again.  Sigh.  It's a small break, actually 3 small breaks, but a break nevertheless.  Again, we didn't figure out what had happened until the day after it happened.  Determining that cause of pain in a child that doesn't talk, can't point to a spot that hurts, and has a high pain tolerance is VERY difficult.  Wes and I laid her on the bed and started poking all over her body to see what made her cry.  Even with a broken arm, she didn't flinch when I manipulated her arm.

She was upset a couple of times last night, so I thought she was just tired or was having acid reflux.  She would get upset for a while, and then calm down and sleep for a while.  This morning, however, she was even more upset and we noticed that she wasn't stemming with her right hand-a dead giveaway.  She always pats her chest with both hands.  We immediately took her to the children's hospital for an x-ray.  We went to a new one in the area, which was amazing.  They have made the hospital like a funhouse for kids.  We actually had a woman who came in to entertain Logan while Abby was getting her splint.  She brought toys and slushies.  It was fun for all, even Abby, who did not mind laying in bed watching cartoons and snacking all morning.
Apparently, when she lost her balance yesterday and fell back, her arm was fractured, even though we caught her before she hit the ground.  Maybe her arm hit before we caught her?  Maybe it was fractured earlier in the day when Wes reached for her arm when she was losing her balance?  I don't know because neither incident was really all that noteworthy.  She was upset, but not inconsolable.  She has been getting very anxious about falling, so we thought she was just scared, not hurt.  She loses her balance a lot, but we always catch her.  I guess we are going to have to be more careful about how we catch her.  Honestly, I was waiting for child protective services to come in and question how it is that this is the second break in a year and we don't know how it happened.  But they didn't come and the doctors were very good, even though we had to correct a couple of them that Abby's diagnosis is Rett Syndrome, not Tourette Syndrome.
Abby is doing fine, though.  Now that her arm is in a sling, she isn't upset at all and  was told that she was the best patient that they had ever had at the hospital.  The hospital has only been open a few weeks, but I didn't tell her that.  She was beaming.  That's my girl! 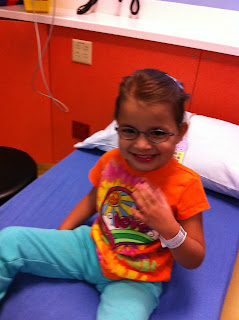 thank you!!
Thanks to the determination from Rett families and the support of all our friends and families, we won 500k for IRSF.  Pepsi awarded 250k, which will be matched by the Pioneer Fund, making a total donation of 500k.  That's a HUGE amount of money!!!  Thank you so much to everyone who voted.  The Pepsi contest could not have been awarded at a better time, as October is Rett Syndrome Awareness Month.
thank you!!
Posted by Ann Marie at 6:56 PM 1 comment: