Lately, Logan has been very curious about what is going on with his big sister.  We were playing catch last week, and he wanted to throw the ball to Abby.  I stood by her to help, and he said he wanted me to move so he could throw it to her.  Well, letting him throw a ball at her was not going to turn out very well, so I had to explain in a way I thought he might understand that Abby's hands don't work very well, and she can't move them in the same way that he can move his hands.  He looked at me like he completely understood, and continued playing catch, without insisting I step aside and let Abby play by herself.  Several times since then, we have noticed Logan trying to hold Abby's fingers apart and stop them from patting.  When asked what he is doing, he tells me he is helping her.  Makes me happy and sad at the same time.  I love that he wants to help but it breaks my heart that she needs so much help. 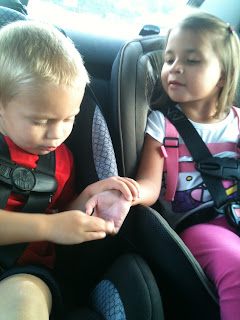 I wish Abby and Logan could play together, even argue with each other, like other siblings, but I am grateful for the special relationship they do have.  Logan has learned how to play carefully around Abby.  He is a very energetic little boy, but he has never knocked his very unsteady big sister over when she is walking near.  How is that even possible?  If he were to bump into her, she would surely fall down.  He runs near her, bounces around her, even hugs her while she is standing, but she doesn't fall down!  That's really amazing!  When he plays with toys while she is walking, he doesn't leave anything that she could trip over on the floor.  When his friends come over, he makes them pick up their toys because "they will make sissy fall".  He tells me when she is reaching for food or a drink, or if he thinks she is wanting something.  And she gets a kick out of him and his nonstop talking and running around like crazy person.  He cracks her up....most of the time.  She pats his little head when they watch cartoons and smiles when he talks to her.  They clearly care about each other, and show it in their own way.
And while they don't argue, they do take a little pleasure in the occasional distress of each other.  Abby often laughs when Logan throws a fit in the car.  She laughs OUT LOUD, which makes him cry even more.  The other day, Logan was screaming (like only a 2-year-old can), and I commented to Wes that Abby was laughing...again.  Logan stopped crying and said "that's rude, Abby".  Yeah, its a little rude, but very funny.  Logan is not completely innocent either.  If I give him candy to share with Abby, he does his version of asking her a yes or no question. He does not, however, use any yes/no cards or use eye gaze to determine her response.  If he asks her if she wants a piece of his candy, he determines (through telepathy, I guess) that her answer is almost always NO.  Imagine that.  Abby never wants Logan to share anything with her. Funny.
There are many times that I wish they could have a different kind of relationship, one where they didn't need an adult to intervene for them to interact.  I guess there will be time for that, though.  Logan is still only 2, and he will learn how to interpret her communication as he gets older and she will have a device that will help her communicate.  We are still very hopeful that there will be a treatment in the near future that will give Abby much more control of her body.  Who knows, maybe Logan will be helping Abby catch the ball after all!
Posted by Ann Marie at 8:19 PM 3 comments: 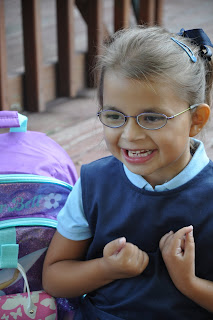 Abby has been super excited about kindergarten for weeks.  We've talked and talked about it, and she has made lots of comments on her trial device about kindergarten and her new school.  Very exciting.  Her first day was supposed to have been on Monday, but it was cancelled due to power outages until today.  She woke up in a great mood and was ready to go!  She had a great send off party, with a surprise visit by her Grandpa, Nanna, Nonnie, and Papa Dave.  Only Abby can get such a crowd out at 8:00 in the morning. 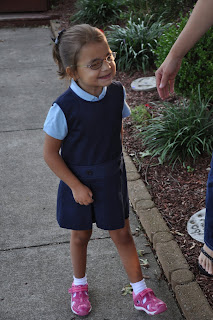 Abby had a lot to be excited about.  She has been placed in a school with a great team of teachers and therapists working with her.  It was a very late placement, but we pulled together a meeting on Friday to go over her IEP and discuss the many things that make Abby.....well, Abby.  I think this team is going to be great!  Her teacher is as excited to have Abby in her class as we are to have her there. She read this blog when she found out the we were interested in her classroom.  How cool is that?  The therapists had lots of great questions at the meeting and I'm confident that Abby will be challenged in this school.  I was so frustrated over the summer about how students are placed in schools in our district.  I found classrooms that I liked, but I didn't feel like my input was taken into consideration.  At the beginning of the summer, I decided that I had done everything I could do in regards to her placement, and I wasn't going to worry about it anymore.  I had a "we'll have to wait and see" mentality.  I just prayed that Abby would go to a school and work with a team the would care for her, keep her safe, and help her learn.  I was so happy when the very school I wanted for her had a spot open up the week before school started.  How wonderful a feeling it is to be able to spend the day with Logan and not have to worry or feel guilty about not being with Abby.  And it was so nice spending the day with Logan.  A little one on one time could be just what he needs. 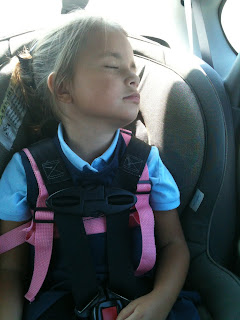 Abby was exhausted when I picked her up from school.  She slept on the way home, and took catnaps until an early bedtime.  Its going to take her a while to get used to the long day.  Her teacher said she was happy all day, was successful on the potty and ate well. Yay!  So proud of my big girl!!!
Posted by Ann Marie at 5:34 PM 2 comments: