We have known since Abby's diagnosis that the likelihood of seizures was extremely high, especially as she got older. I have been thinking about the possibility a lot lately because the onset is often around 4 years old or older. Even so, it took me by surprise when my little girl started seizing on Friday. At first, I thought it might have just been a tremor. I read a little about them in my Rett Handbook before the next one hit about an hour later. By that time, there was no doubt what it was. Abby had 5 seizures by the time we got to Kosair Children's Hospital, and another 3 while we were there on Friday. The next 24 hours were without seizures, thanks to the high dose of medicine that she was given when she was admitted. Though there were no seizures, the was also very little sleep and definitely no smiles. One side affect of the medicine was agitation, and Abby was feeling it pretty bad. When it wore off on Saturday evening she was much happier, but began seizing several times a day, and continues to do so. She seized about 5 times last night, and once during a nap today. Her medicine is either not all in her system yet, needs to be changed, or she needs more of it. It was raised this morning and I suspect when we talk to the doctor tomorrow, it will be raised again. This has been a very scary weekend for all of us. Thanks for the messages and prayers. We definitely appreciate it. Abby is blessed with so many people who love her. I don't know how we would get through all this craziness without you. We aren't sure why this is happening to Abby, but it's a relief knowing that God is in control. Despite the seizures, Abby has been in a great mood this evening. Hopefully she will have a restful night! 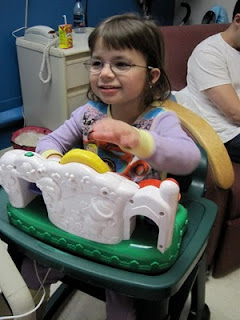 Abby had an EEG while at the hospital. Thankfully, she was asleep (because they needed her to be still for 20-30 minutes). If you know Abby, you know how difficult that can be. People with Rett typically have abnormal EEG's. Abby is no exception. It showed a lot of spikes coming from different areas of the brain. Her neuro said it is likely that these were not her first seizures, and that she probably has been having them while sleeping. He also said she will most likely have to be on anti-seizure meds indefinitely. Not the best news ever, but at least the seizures are usually manageable with the meds. 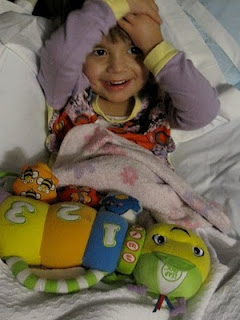 Abby was happy when we brought some of her favorite toys to the hospital.
Posted by Ann Marie at 5:23 PM