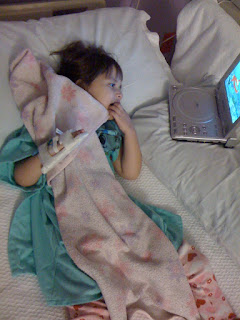 It has been a crazy week, to say the least. Abby went to the doctor on Wednesday with a bronchial infection. After talking to the neuro about the fact that she was still having seizures every time she fell asleep, he admitted her back to the hospital. He told us she would be directly admitted, but he did not send the referral to the hospital, so we had to wait for 5 hours before getting a room. There are a whole list of ridiculous things that happened at the hospital this week, but I will not start venting or this post will take an hour to write.

I might just vent about one thing. We learned that hospital staff throw around the term "morning" for every time of day. Abby could not eat when we got to the hospital on Wednesday night because she was going to have an MRI the next "morning". In fact, the MRI was going to be at "about" 1:30 in the afternoon, so Abby also couldn't eat on Thursday morning either. After talking to the doctor at 1:00, they realized she didn't need an MRI at all. It's a good thing she went 20 hours without food or drinks. Anyway, I am not going to vent. Abby's seizures on Wednesday night did not stop until she was given Ativan at 5am. We were frustrated that we were sent to the hospital by her neurologist, but they apparently were not expecting us, and didn't have any particular orders from the neurologist who sent her.

On Thursday "morning", the doctor doing rounds was Dr. Puri. We had a consult with him when we got Abby's diagnosis. He has treated many people with Rett, and was so great with Abby. He knew exactly what to do, and it worked. He gave her a different medicine last night, and it was the first night she has had without a seizure in a week. I am now his biggest fan. We are so much more comfortable after talking to him. She will have seizures again, maybe even tonight, but we aren't so scared now and we know what to do to get them to stop. We have been extremely concerned that Abby hasn't been able to sit up, or bare weight on her legs she her first seizure last Friday. He assured us that, though she is very weak now, the seizures should not have any permanent affect on her ambulation or balance. It's a relief to know that Abby will get back to herself soon. Thanks for all the prayers and encouragement. We are glad to be home just in time to celebrate Logan's 1st Birthday.
Posted by Ann Marie at 1:11 PM