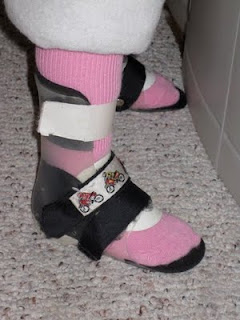 We had a uneventful weekend, which is nice. Abby was pretty moody. I think her reflux is making her upset. Reflux is very common with Rett Syndrome. I started giving her Prevacid twice a day yesterday, instead of just once, so hopefully that will help. I hope the Prevacid will allow her to eat the same foods without having problems. She is on a high fat high calorie diet. Typically, girls with Rett need more calories and fat to maintain their weight than typical kids. She is a great eater, so it hasn't been too much of a problem getting her to eat enough. With the reflux that has developed, though, some of the fattier foods, like boost, have been causing her to spit up. We are going to Birmingham next month as a part the Natural History Study. We will also get to talk to a nutritionist as part of the study who is familiar with kids with Rett, so I'm sure she will have some suggestions.

Abby's PT suggested that she wear these AFO's an hour a day to help her shift her center of gravity. She tends to lean back most of the time. These boots are raised a little on the heel and have support on the calf, preventing her from leaning back. She does not like them at all. She wore them for 30 minutes tonight, but it was a struggle. She does not want to walk with them on, which is sort of the point. She just stands still. It will definitely take some getting used to. Like with most things, she's a good sport. I'm sure they feel pretty awkward.
Posted by Ann Marie at 5:12 PM