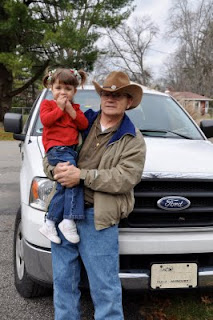 Okay, it's catch-up time. On my last blog, I mentioned Abby was going on her first field trip. Her class went to the North American Live Stock show. My dad and I went along with her. I was hoping she would react to the animals, but she didn't seem too interested. She does not like going to the zoo, but I thought maybe it was because the animals are too far away for her to really get excited about. It turns out, even when she is REALLY close to them, she is still not interested. She was actually pretty fussy most of the trip, until we put her headphones with her music on. The expo center was a little loud, which was bothering her. She was much happier sitting in her stroller and listening to her music. She's just not in to animals right now. However, if I could some how affix buttons onto the animal and string twinkling lights around it, that might be another story. But then PETA would get involved...I better just let it go. 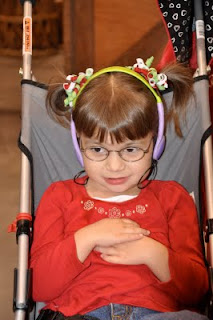 Abby has developed an interest in cartoons, a particular cartoon, actually. We were in Blockbuster the other day (yes, there are still a few people who actually go to the video store), and Abby kept hitting a Little Einsteins DVD. I noticed in the past that she enjoys the music from the cartoon if it is on, but she never really watched much of it. She does not like to sit for very long, so she has never watched TV much at all. Anyway, she was clearly communicating that she wanted the movie. When I showed her several different movies, she kept hitting and staring at the Little Einsteins. Of course, we rented it. She has been watching it every day since. She gets excited as soon as the music starts at the beginning of the show. We play it on her portable DVD player in her room, so she can wander around her room while watching her show. It is so nice to find something that I know she enjoys. So often, I have to just guess what I think she might like. 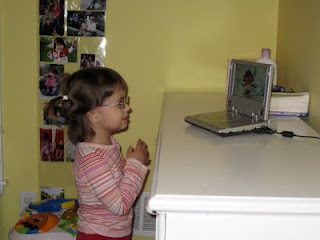