We have tried several times to catch what we think are seizures on an EEG.  Her events/episodes/seizures are very sporadic.  She may have 8 in one day, and not another one for 3 weeks. We had an appointment with her neurologist yesterday.  He suggested that we add a new medicine because she continues to have events on a regular basis.  I am uncomfortable adding a new medicine without confirming they are seizures.  As we left the office, I asked if we could try again to do an ambulatory EEG.  That's an EEG that they hook up in the office, but we get to go home and return the next day to have it removed.  As it turned out, they had an opening.  Just so you know, that never happens.  It is usually a matter of scheduling the EEG several weeks in advance.  Although Logan was not thrilled for what amounted to four hours in the doctor's office, we had to do it.  I never thought I would pray that she had a seizure/episode, but today I did.  I am so relieved that she did have an event before we returned the EEG!! Hopefully, everything was working correctly and the doctors will be able to read it and let us know definitivly if these events are seizures of not.  Just knowing that we don't have to keep trying to catch one on the EEG will be a burden lifted. 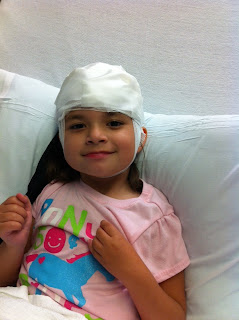 Hopefully, Abby won't have to sport the head wrap again for a while.  I pulled out all the stops today trying to get her overly excited/anxious.  We went shopping, which made her a little anxious, but when I started running out of time, we headed to lunch.  If Chick-fil-a at lunch time doesn't cause a seizure, I don't know what will.....and it did. 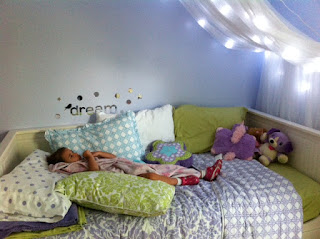 I felt more than a little guilty about trying to get her to have an episode, so I gave her plenty of time to relax and wind down after the EEG was removed. Sorry, Abby:(