Abby stayed home from school today so that I could monitor her seizures.  She had been having one every morning last week, and then they increased over the weekend. On Monday, she vomited at school.  When she has an increase in seizure activity, it isn't unusual for her to vomit.  Also, if she was getting some sort of stomach bug, she would have seizures.  That makes it difficult to determine the cause, if there even is one.  She seems to be in a pattern where she has about 3-4 weeks without seizures and then she has a week or so with daily seizures.  I expected to spend the day at home, recording anything unusual on my phone so that I can show it to her neurologist later this month.

I had my phone ready to record Rett episodes all day, but nothing crazy happened.  Instead, I got a photo of Abby not doing anything too crazy at all, which was nice.  Well, now that I look at it, her lips aren't exactly pink, but that's okay. It was a nice day.  Tomorrow will tell if this seizure "phase" is over. 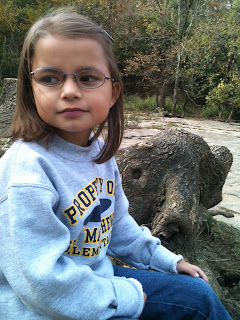 If anyone has any insight into these seizure patterns, I would love to hear it.  I don't think there is a trigger.  She does well for several weeks, then she starts having a seizure or so every day for 4-7 days.   Those seizures are all short, about 20 seconds.  She stops breathing, lips turn blue, non responsive, eyes roll back or stare, her tongue is doing something weird (i can't really tell what, but it sounds like something is happening in her mouth), and she sometimes vomits.  When it's over, she is out of sorts for about 15 minutes (very jumpy and limps are flailing) and then she sleeps for about 30 minutes.  When she wakes, she is back to normal.  I haven't caught these episodes on an eeg.  Has anyone's daughter experienced similar episodes?  We've increased her Keppra, but they still happen.  We have also given her Klonopin during the week when she has these episodes, but it didn't stop them either. I think we may need to get them on an eeg before attempting to increase meds again, or just deal with them. She sees the doctor in a couple weeks.

My post was going to be about how nice the day was because I was expecting to have to deal with seizures, but instead we spent the day hanging out and later listening to a webinar about the IGF-1 trial.  I got a little sidetracked. Even though she didn't have any seizures today, they seem to still be on my mind.
Posted by Ann Marie at 9:49 PM