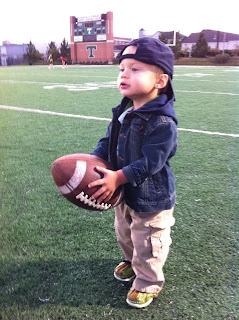 Most of this blog is dedicated to Abby and her journey with Rett Syndrome, but this post is about another amazing little kiddo.  Often, Logan plays the role of Abby's little brother, especially when he accompany's me at her school, therapy, or other appointments.  I'm sure he's had more therapy than any of his friends.  He knows all about communication switches and loves using them to tell stories.  He is one of the boys who is always jumping and running into things, yet he has never knocked Abby down, which is nothing short of a miracle.  They share smiles in their carseats-Logan especially likes Abby's sneezes and squeals.  Sure, he gets frustrated when she pats his head with her cast (ouch!) and is mad when he has to wait for her to finish on the potty before we are able go outside, but he is very gentle and sweet to her.  He runs to her bedroom to grab a pull-up and a wipe as soon as I take her to the bathroom.  They both like for him to feed her snacks, and he is happy to share his juice box with her.    He's a sweet little guy....feisty as any little guy I've ever seen, but sweet nevertheless. 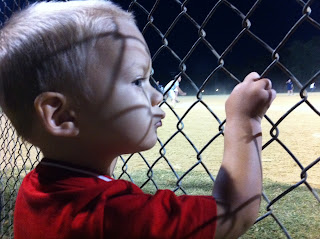 He is crazy about sports, or balls, or both.  It's an obsession, really.  Instead of playing at the playground, he wants to watch the people playing tennis.  I made a special trip to an amazing park that I though he would love, but he only wanted to stand and watch the UofL field hockey team practice across the field.  He can't get enough of Sports Center, and was loving laying on the couch watching the World Series.  I thought this was surely just a phase, but, when he starting grabbing the sports page, I began questioning that assumption. 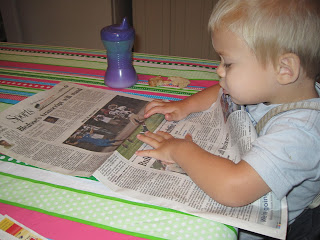 Fortunately, Logan is going to spend some one-on-one time with his grandpa tomorrow while Abby goes to therapy and the dentist. He is sure to have a blast hitting baseballs and shooting baskets. 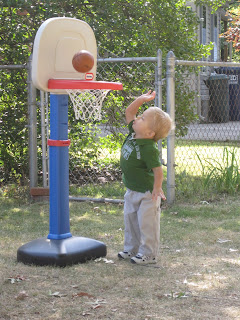