What are we dealing with? 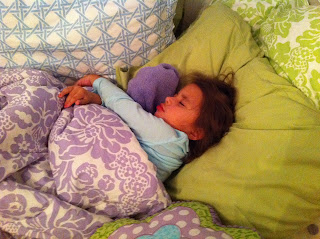 Abby has been on seizure meds for 2 years now.  We have gone back and forth about these meds because girls with Rett Syndrome have so many episodes that mimic seizure activity and we have never confirmed one on an EEG.  She may have several a day for a week and then not have another one for weeks.  The minute we schedule an EEG, she will go seizure free until it is cancelled.  Seriously, it happens every time.  Abby had an appointment at the Rett Clinic last month, where I showed Dr. Percy a video of the events that she has been having for about the last  6 months (which are different from the seizures that she was initially put on medication for).  She was initially put on Keppra when she had a lot of seizures during an illness.  She was fighting off a stomach bug and sinus problems.  She hasn't had any seizures like that since then.  Dr. P  discussed the possibility that those true seizures were triggered by her illness, but that these recent episodes are not seizures.  They could be Rett spells, other neurological events that shouldn't respond to seizure meds.  If so, we need to consider if she needs to be on a daily medication.  This comes on the heels of her having the best day ever when I forgot to give her her morning Keppra dose.  Coincidence?  I don't know.  I didn't really think she was having any side affects, but she was so alert and vocal on that day that I am now questioning that assumption.  We really just need to confirm one of the episodes on an EEG.  I'm so tired of not knowing what the heck we are dealing with.
We had an EEG scheduled last week.  Of course, she had an all time record without a seizure.  We ended up canceling the appointment at the last minute.  She had three weeks without anything that resembled a seizure...until tonight.  It was scary.  I think part of the problem was that she was congested, which made the vomiting and lack of breathing that usually accompanies these events even more problematic.  I hate being so helpless when she is struggling to breath.  Ugh.  I hate Rett Syndrome.  The only positive that I can find is that she is very relaxed afterwards.  It was right before bed time, so she took a bath and went right to sleep.
I don't know if it's better for these events to be true seizures or Rett spells.  If they are seizures, there might be a better chance of controlling them.  That would mean  she would continue/increase the meds and the side affects that go with them.  If they are other neurological events that aren't true seizures, she won't be taking meds, but there will be little chance of controlling them.  It seems like almost all of Abby's friends with Rett are struggling with seizures right now.  They are just a nightmare. We need a more effective treatment for seizures for our girls very soon!
Posted by Ann Marie at 8:31 PM