At least we know..

After talking with Dr. Percy and our local neurologist, we decided to start weaning Abby off Keppra, her seizure medicine.  When she first started having seizures last January, she was fighting off a bronchial infection and a stomach virus.  She was put on Keppra right away, and after a couple of weeks of changing the dosage, her seizures stopped.  She has only had one episode in the past 12 months. We wanted to know if the seizures were only due to the illness.  If that was the case, she could go off a daily medication, and only take something when her immune system is compromised. It was a long shot, I realize.

We lowered the dose on Friday.  We were hopeful that she would at least be able to take a lower dose, but that's just not the case.  She started doing some crazy neurological things yesterday afternoon.  I figured it could be a coincidence.  She does have Rett, and there is a little crazy just about every day.  Today, however, she had a seizure at school and then another two this evening.  We went ahead and increased her to her previous dose tonight. It may take a few days for the increased dose to get into her system, so we'll see what happens tomorrow.

I feel bad that we lowered her dose now that I see that she needs it, but at least now we know.  We have never confirmed her seizures on an EEG, so I always wondered if maybe the were just a "rett thing".  Regardless of what they are, her seizure medicine makes them stop (which I guess confirms that they are seizures), so she will keep taking it at the dose that she was on before. Of course, the seizures now are completely different than the ones she had last year.  She's mixing it up a little bit this time.  Blue lips, vomiting, no convulsing, blank staring, and then sleeping. Please pray they stop quickly and the Keppra will keep them under control. 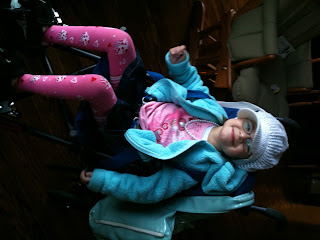 On a lighter note, Abby was super excited for her Valentine party on Monday. She was all decked out in her cupcake tights and sequined hat.
Posted by Ann Marie at 6:09 PM