Of Friday, we went to Birmingham for Abby's appointment with Dr. Percy and Jane Lane.  It went very well.  Abby is now 31 pounds and 100 cm.  She is growing on the same curve that she has always been on.  It's on the low end, but is normal for her.  We talked about new developments for her in the past 6 months including seizures, difficulty swallowing, and falling spells.

They are pleased that she is having no side affects with the Keppra she is taking to control seizures. It would be preferred to get a seizure on an EEG to confirm that they are seizures before giving medicine to control them.  He did say that if they weren't seizures, they wouldn't stop only when taking Keppra, so I'm confident that giving her the Keppra is the right thing for her now.  We also discussed her issue with holding saliva in her mouth instead of swallowing it.  She continues to have times throughout the day  where she doesn't swallow.  They agree that it is apraxia, and suggested that I talk to her OT about oral stimulation techniques.  It seems that it might be connected to anxiety as well.  They witnessed Abby having a falling spell.  Dr. Percy thinks it might be dystonia, triggered by anxiety.  While she is falling, she often holds her breath or stops swallowing.  When the spell is over, she often swallows and begins breathing regularly.  Long story short- Although she doesn't appear to be overly anxious, the swallowing and falling issues might be triggered by anxiety.  We'll just monitor to make sure the swallowing doesn't interfere with nutrition/weight gain and to make sure the falling doesn't affect her mobility too much.  Some girls are on medication to help with anxiety, but they don't think it is needed for Abby at this point.  I feel much better after talking to Dr. Percy and Jane Lane.  The fact that they were not concerned about the issues Abby has had since our last visit calms my nerves a bit.
Since UAB is a 6 hour drive, we stayed overnight and made the most of it. 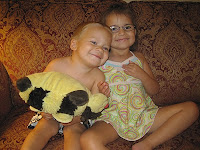 Abby and Logan swam and hung out watching cartoons. 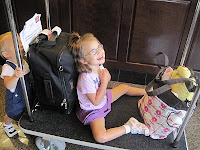 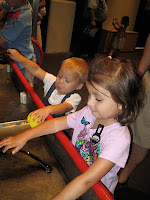 We spent the day today at the Birmingham Children's Museum.  It was a blast.  They especially loved all the water exhibits. 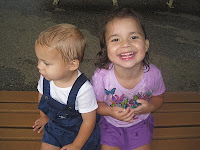 On the way home, we stopped at Mammoth Cave.  Well, it rained while we were on the trail, so we all got soaking wet.  As you can see, there were no complaints.  Last year, we never would have tried to do so many new things with Abby.  She would have had so many meltdowns. We have had our fair share of issues this year, but I can't get over how much more relaxed and less frustrated she is.  We drove 12 hours is 2 days and she didn't get upset in the car once.  crazy.  Now Logan in the car- thats another story.
Posted by Ann Marie at 7:44 PM